Expanding Outside U.S.? What You Need to Know About Rewarding Your Employees

It’s no secret that in order to successfully attract and retain talent, employers must establish competitive and sustainable pay policies. But often, much attention goes towards determining “how much” and “who” without taking other facets of reward into consideration. In many markets around the world, getting pay right may also involve other aspects, such as “what” in terms of specific elements and sometimes even “when” they must be paid. Pay aspects such as these may be statutory obligations for employers, mandated by collective agreements or simply customary practice in specific markets. What’s more, local tax treatment may incentivize specific elements of pay but that’s helpful only if employers are aware of the programs and their benefits. For ‘new’ employers in a market, ignorance is not blissful. Rather, it’s often expensive, both in terms of controllable employment costs as well as employers’ long-term ability to retain staff.

GET A FREE "SNEAK PEEK" INTO THE GLOBAL EXPANSION REPORT BUNDLE! 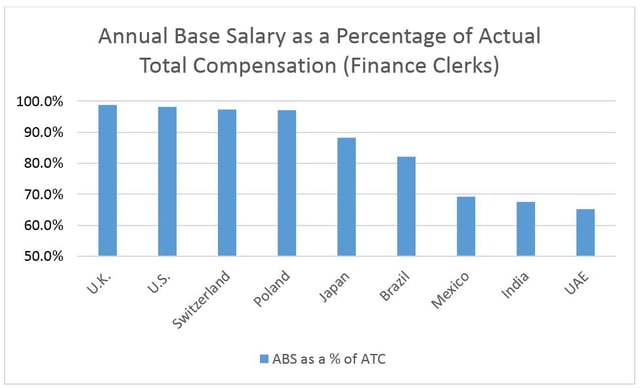 Pay or salary may seem like universal concepts but what that means in concrete terms on the local market varies widely around the world. In markets like the U.S. and the U.K., basic wages or salary constitute the lion’s share of fixed direct cash for most staff.  But in many other countries – in India, Mexico and elsewhere – pay may include a variety of ‘add-ons’, e.g., allowances or other payments provided either in tandem with wages or on an annual basis. Examples include 13th or 14th month payments (i.e., fixed bonuses equal to one month’s pay), vacation bonuses and a variety of cash allowances meant to offset work and/or living-related expenses such as meal, transportation and housing. Where such payments are particularly common, they may constitute a significant proportion of employees’ annual cash packages. 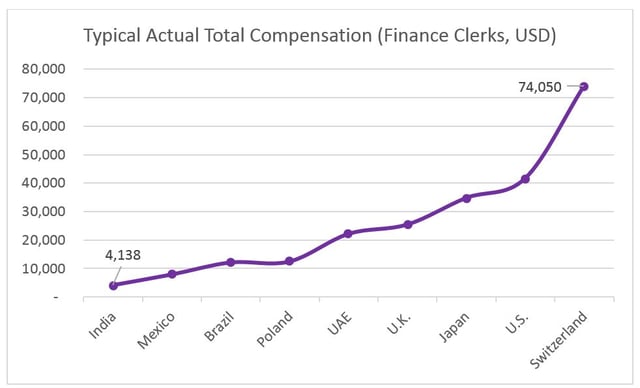 On the surface, the common provision – and sometimes obligation – to provide all of these additional payments might seem to something specific to “high priced” markets. However, this isn’t necessarily the case. Labor costs differences are subject to a whole host of socio-economic and labor market influences; pay package composition is just one aspect. In some cases, certain mandated payments may be capped at a fairly low level, meaning they are proportionately more substantial for low wage workers than for higher level professional staff. In addition, the payment of certain allowances may be tax-favored (up to certain limits), offering more efficient avenues to reward staff. In such markets, thinking only in “base pay” terms risks missing the forest for the trees (or more simply, ending up with a non-competitive and inefficient approach to pay). 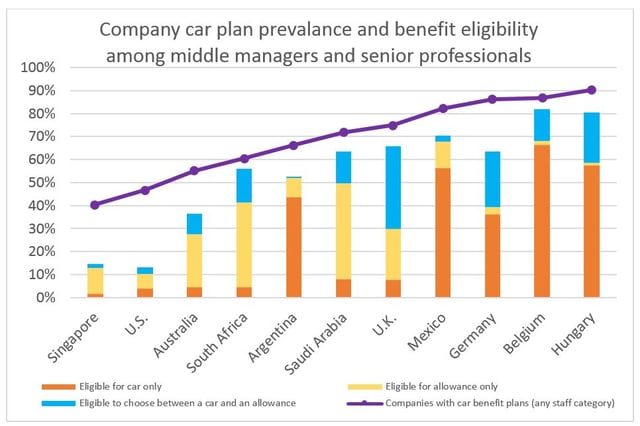 Additional cash payments can also arise from certain other benefit practices where an allowance may be provided in lieu of a fringe benefit. Such payments may be viewed outside of the scope of “compensation” but can represent significant costs under certain circumstances. A good example can be found in company car benefits. While it isn’t very common for U.S. employers to have car plans and – where they exist – it’s unusual to extend eligibility beyond executives and certain client-facing roles, company car plans are typically found in a variety of countries with eligibility commonly extending to middle management and even some portion of non-sales professionals. However, companies may offer cash allowances in lieu of a company-sourced car.  Such a decision is generally driven by local taxation environments which may favor (or discourage) a particular benefit form.

Additionally, company cars is a reward area where employers are increasingly seeking to not only optimize programs but also to offer staff a more “consumer-driven” employment experience, sometimes allowing staff to select the benefit form they prefer (i.e., a car or cash). That said, there are markets were the taxation barriers to offering either cars or cash allowances are just too strong and largely preclude one of the practices.

Darryl Davis is a senior consultant with Willis Towers Watson’s Global Research Unit (GRU) which specializes in helping multinational clients understand and leverage the ever-changing facets of compensation, benefits and employment environments around the world. Since 2000, he’s also assisted numerous companies with their reward market intelligence and design needs both in EMEA as well as globally. Prior to joining the GRU, was a senior consultant with Global Data Services for 15 years and was a regular writer and speaker on EMEA reward market trends. Darryl has a Master in Arts degree from the University of Connecticut and is based in Brussels, Belgium.